I’ve heard a few stories recently about disappointed “aurora tourists” around the world. Thousands of people travel every year to Alaska, Iceland, and Norway in an attempt to see this natural phenomena that so often pops up in brilliant and colorful pictures on Facebook and Twitter. Often these images are breathtaking open landscapes or mountains that seem to be fully illuminated by the bright green and pink lights shining overhead. So, does the aurora really look like the pictures you see all the time?

I’m here to tell you, most of those images are not even close to a representation of what you see. I’ll barely stop myself short of saying that they are, fake.

In all honesty, many of the images I see in feeds, even winning awards are absolutely fake. They are composite images where extra long exposures of landscapes are blended with images of the night sky (sometimes not even from the same place) to create a striking visual image.

I’ll start by being honest myself, most of my aurora photos are enhanced digitally. The color is deeper and the contrast is greater than what I could see with my eyes. Sometimes colors appear in photos that I didn’t even see while watching. I enhance these photos mainly for the purpose of printing. Actually, the printed work ends up looking much like what I saw, mainly because a print doesn’t have the backlighting that a computer monitor or phone screen has. But, I’ll touch more on that later.

Of course, photography is often seen as an art, not necessarily a representation of reality. However, it is a bit of a disservice to people that want to travel to far-off, often very cold places to witness them in person when photographers are not honest about the work they produce. Many of these photographers are honest about their work, openly stating that they use composite imagery or other enhancement techniques to make photos “pop.”

And then there are others, that swear that their work is exactly what they saw. Well, almost anyone that says that is very mistaken, or lying. Here’s why.

The first reason that the image is not like what you see is simply because the camera sensor is more adept at picking up light at the wavelengths of the aurora than your eye is. There are people that are more sensitive to certain colors than others, but I think you’d be hard-pressed to find a person whose eye works as well as the camera sensor.

The image below was taken at the start of a fairly incredible display from Fairbanks, Alaska. The left image is very close to the raw image from the camera. Even here, the green color is much more highly saturated than what I could see. Other than that, the brightness and contrast is on par. On the right, I’ve desaturated the color to closely match what I did see. The image on the right is representative of something I may only see once every week or so up here. Anyone getting to see this on a brief trip to the north might be considered fairly lucky.

Like I said above, I usually process my photos to look (mostly) accurate for printing. This usually means increasing the exposure and color saturation to account for the lack of a backlight. The effect on an LCD monitor or phone screen is quite drastic:

This example is fairly tame. Again, this is something I might see once or twice a week in Fairbanks. Someone seeing the aurora for the first time would probably be pretty impressed. However, this night had some brief displays that were much more vibrant!

The below photos are of a moment when we had a bright ribbon directly overhead. It was fast moving, with lots of structure and the crimson or pink low-altitude color was really shimmering. It was absolutely gorgeous. It was the type of display that gets Fairbanksans to pull their cars off to the side of the road and watch. However, it never quite lives up to what I frequently see in photos posted online the next day.

Displays like the one above are jaw-dropping. Sometimes we go over a month in the winter months without seeing the aurora quite like this. So if you’ve traveled from down south to see the aurora and got a display like this, you are lucky. Not only do we not see the aurora like this with great frequency, but it doesn’t last long. Sometimes only a few seconds to minutes in a night. So, if you weren’t out watching, you missed it.

That’s the next “pain” of aurora watching. It takes patience. I’ve spent so many nights sitting out in the cold for hours on end, only to finish the night without much to show for it.

Or the weather doesn’t cooperate. Even if the possibility of aurora activity is high, it doesn’t matter in the slightest if the whole area is overcast.

Aurora chasing really requires staying up all night, keeping an eye on the sky. There are apps that help warn when there’s activity, but they aren’t even close to perfect. You need eyes on the sky. If you are staying somewhere with internet access, there are usually nearby all-sky cameras that you can keep tabs on while staying warm. That’s what I do when I shoot from home. My favorite for the Fairbanks area is the all-sky camera at Poker Flats: http://allsky.gi.alaska.edu/. One of my favorite features of this camera is that you can use the setup menu in the upper right to turn it on “eyeball” mode, which actually displays the desaturated image that is more like what you will actually see, vs. the raw camera image.

What are you likely to see?

Almost every night that it is dark and the sky is clear in the interior of Alaska, the aurora is visible. This is the same for every location at latitudes near the auroral oval, near latitudes of approximately 70° when activity is at a minimum. And I think this is where a lot of people experience disappointment.

Below is what people are most likely to see if they go on an aurora tour for maybe one or two nights. In this case, you typically have a dim band on the horizon. Here’s where many photographers (myself included) tend to really push it, using very long exposures to pick up the aurora light and color.

I have been out aurora watching on nights with a nearly full moon when the landscape is brightly lit up. It’s fairly rare to get an aurora that is bright enough to compete with the moonlight. It’s happened a handful of nights in my 10 years living in Fairbanks. Photos with bright landscapes and aurora are almost always very long exposures, or composite images.

The last thing I want to do is discourage people from traveling to see the aurora. Actually, quite the opposite. It’s something that should be on everyone’s bucket list. I do want people to be prepared for what to expect, and to not be disappointed when a 3-4 day trip to Alaska or Norway doesn’t meet the expectations.

My recommendation, is expect to take some time. Especially if traveling to Alaska, Iceland, or Scandanavia. These are all incredible places. Plan on experiencing them, and not just trying to catch aurora at night. Plan some things to do in the daylight. Spend one or two weeks there. So frequently I see someone ask on a forum, “hey, I’m coming to Fairbanks for two nights to see the aurora, where should I go?” This is wrong. Do not do this. Plus, how do people have the money to do this? If you do happen to have that kind of money, please consider making a donation to me on Ko-Fi, as it helps me spend more time writing 🙂

Do a lot of research on the area, especially on good places to watch for aurora. Check out my article on Viewing the Northern Lights. Have a plan ahead of time. If you plan on doing an “aurora tour”, most likely you’ll only do it for a couple nights, as they tend to be expensive. Maybe that’s a good start for some, but have a plan for viewing on your own. The Facebook page Aurora Borealis Notifications is an awesome, active group where members frequently post real-time activity from around the world.

Don’t just make the trip about aurora! Low activity or poor weather conditions could leave you totally disappointed. As an anecdote, my mom has spent over 3 weeks here in winter months visiting me and has never seen the aurora. We’ve always had plenty of other things to do. If you’re traveling to Fairbanks, I’m always willing to give suggestions. As a question in the comments below, or send me an e-mail at lee@lwpetersen.com. I’ll try to respond quickly as long as I’m in service.

Patience and research are the way to go. I wish you all the best of luck on your aurora viewing endeavors!

In case your were wondering about the cover photo – here’s the comparison. It was still a pretty incredible night. The edited version looks fairly accurate in print, and looks great on metal! 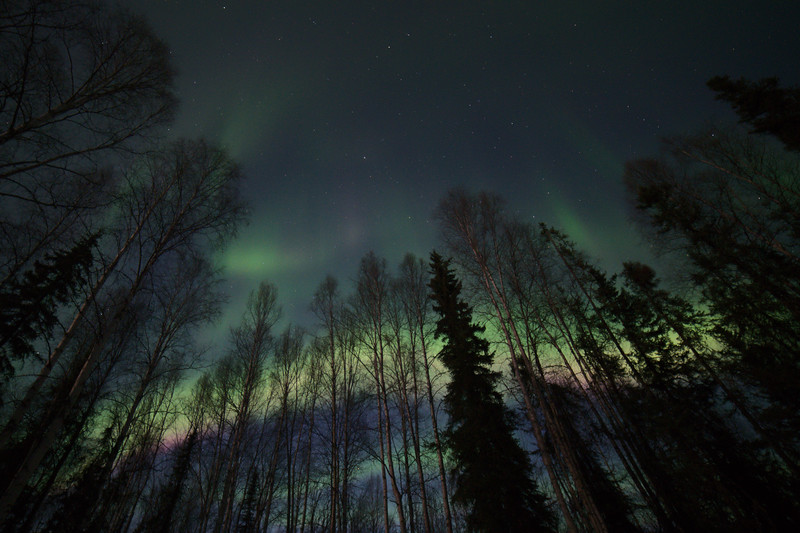 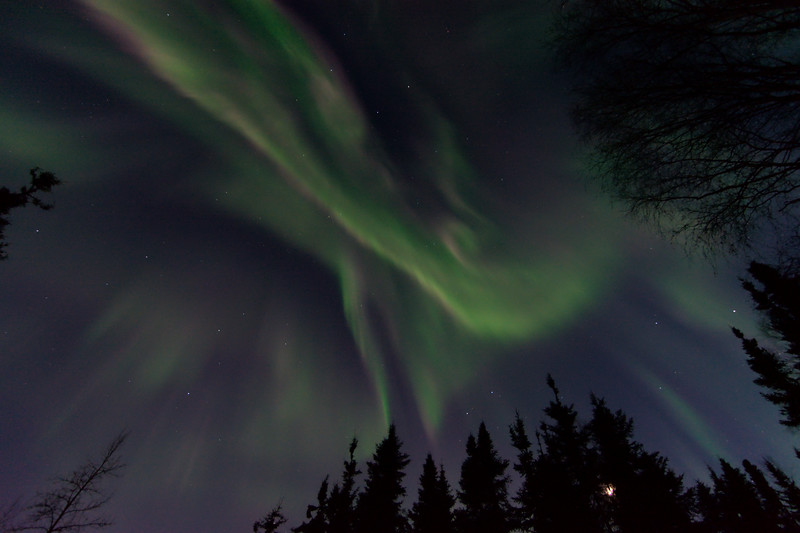