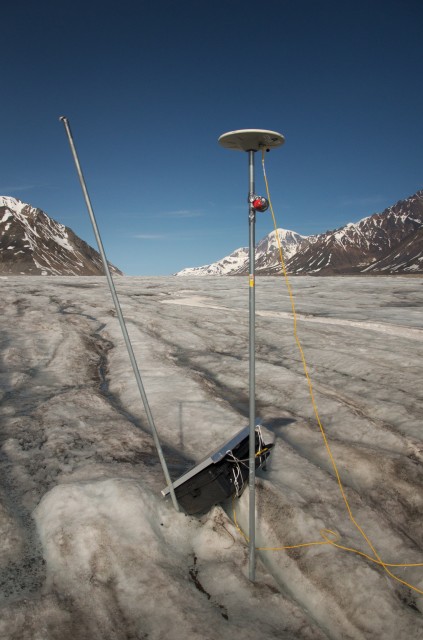 With all the gear on top of the moraine, the theodolite and radar running more or less continuously, we spent the next day placing all the reflectors for the theodolite and starting to check up on some GPS. The photo to the right shows one of our GPS stations. The receiver and battery are in the Pelican case with the solar panel strapped to it and the antenna is fixed to some electrical conduit that is drilled into the snow and ice in spring (usually 20 ft. down). The orange thing duct taped to the pole is one of the reflectors for the theodolite. The theodolite uses a laser to range the distance to each reflector every 15 minutes. Attaching a couple reflectors directly to the gps antenna poles gives us the exact location of each reflector which we then use to calibrate the theodolite for the positions of all the other reflectors.

Some time was also spent maintaining all the GPS stations over the first few days. We have 8 GPS units on both branches of the glacier (the main branch and the Loket, a large tributary), as well as one fixed unit on bedrock (which is real fun to get to). As the antenna and tether poles melt out of the ice, the pole sections need to removed (to prevent the catastrophe of an antenna falling from 20 ft. onto ice or solar panels) and sometimes new holes need to be drilled so that the equipment will make it to the end of summer without falling over. 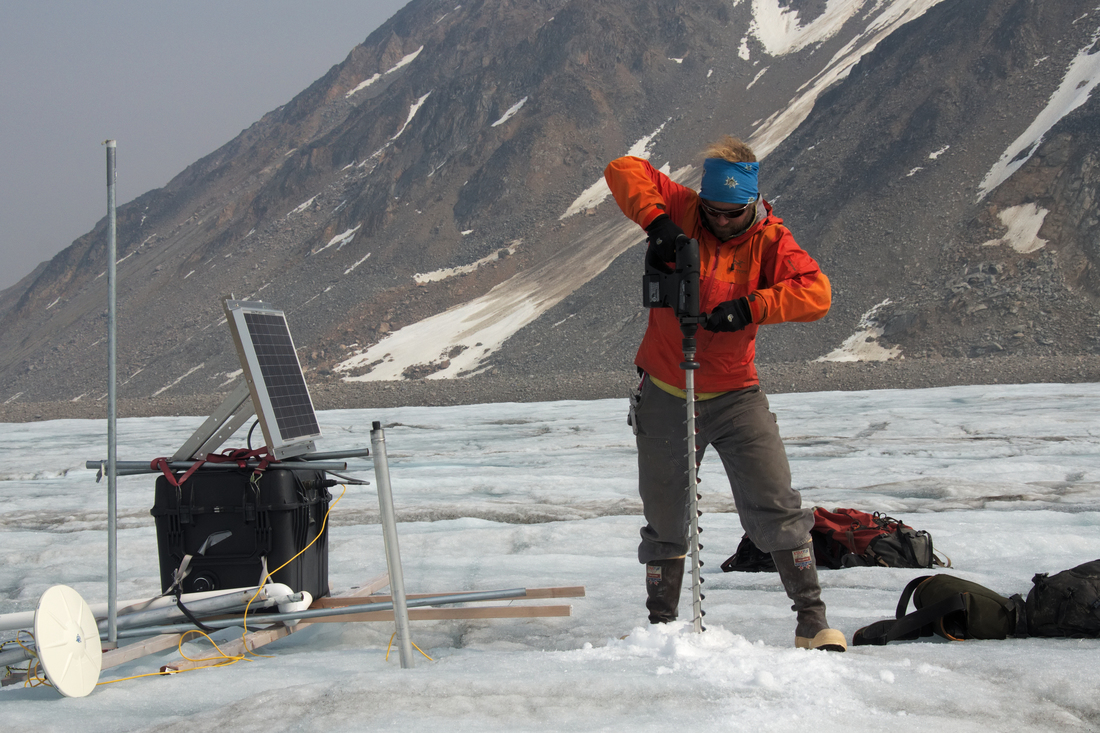 Andy drills a hole for a new section of antenna pole for a GPS station located on the Loket tributary. 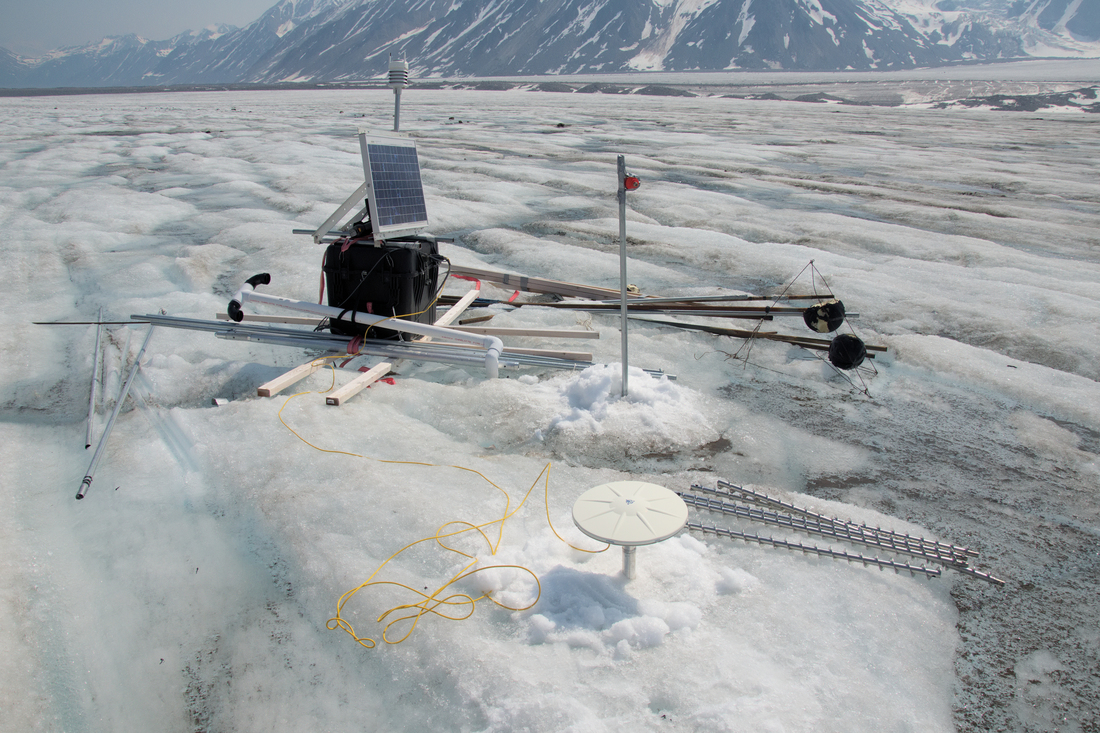 Another GPS antenna re-drilled for the summer melt. There is also a lot of junk here. We’ve been collecting a bunch of stuff that we find walking around from about 20 years worth of glaciology and geology hoping to get most of it off the glacier at the end of the project. 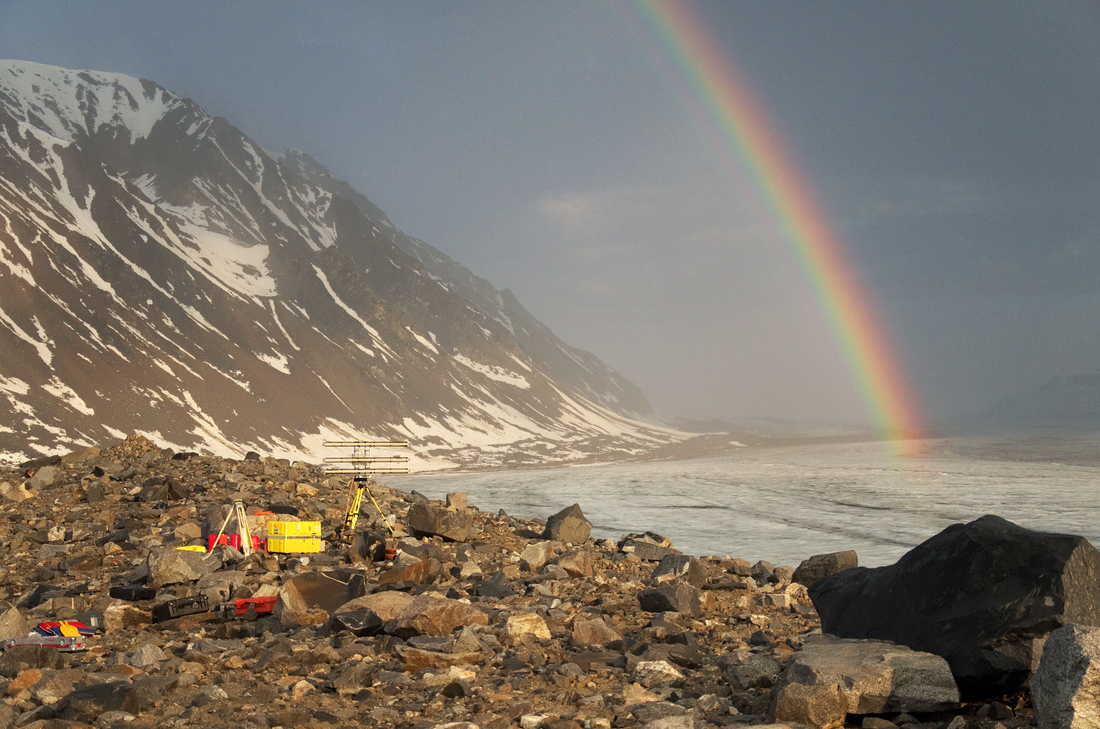 One morning I woke to the sound of rain on my tent. Since the theodolite can’t get wet, I had to go cover it. Then the Sun broke through the clouds giving us a nice rainbow and even a double rainbow for a while. I couldn’t get great shots of it because it was absolutely dumping rain on me. Of course, this is 6 am.

Walking around, we stumbled on quite a few large moulins on the Loket side of the glacier. These moulins are essentially 1500 foot water slides to the bottom of the glacier. Snow drifts into them in the winter and remains there a lot longer into the summer if there is no water to melt it out.

I fooled around taking video of some of the larger streams and moulins:

After the first three days the temperature dropped quite a bit as a front moved in. A good portion of the rest of our stay was chilly, but not too cold with drizzle and freezing rain. Once we had a good schedule worked out with operating the equipment back at camp there was more free-time to explore the area and venture out to some equipment that we had further from camp. One site we went to visit was a pressure sensor that was in a nearby lake. We wouldn’t have been able to cross a few of the streams a few days earlier because there was so much melt when we first arrived. 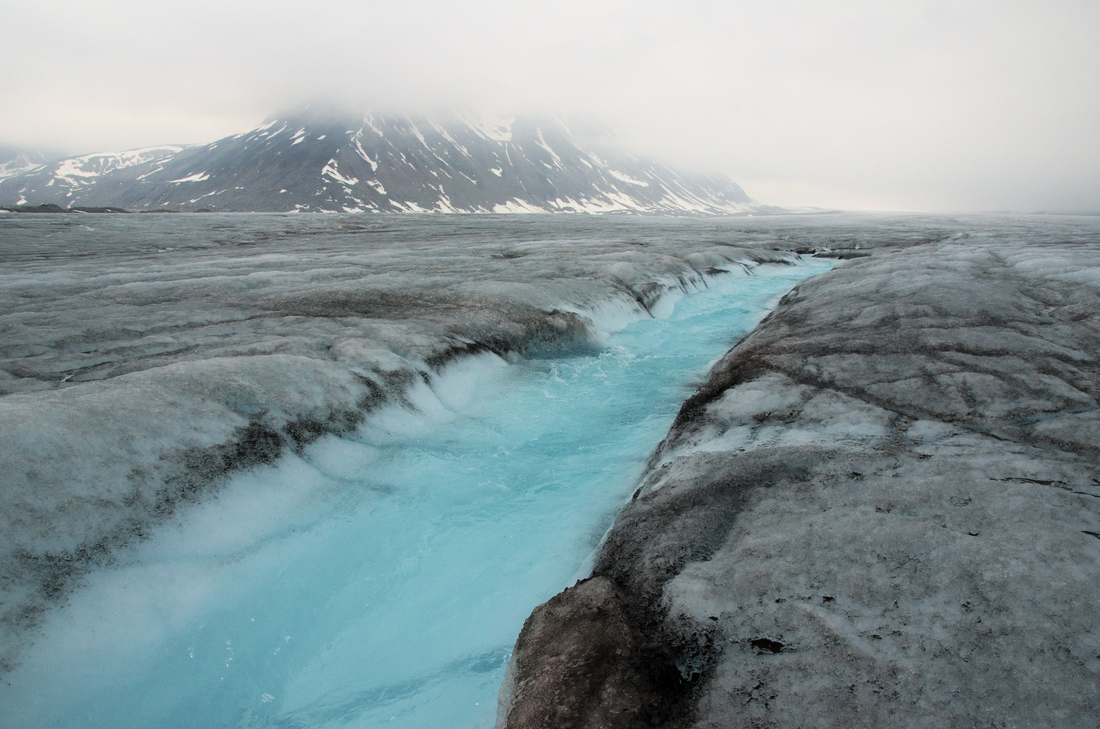 For this excursion we needed to cross the glacier to the northern margin. There were a few streams to cross, but not quite as swollen as the days before. 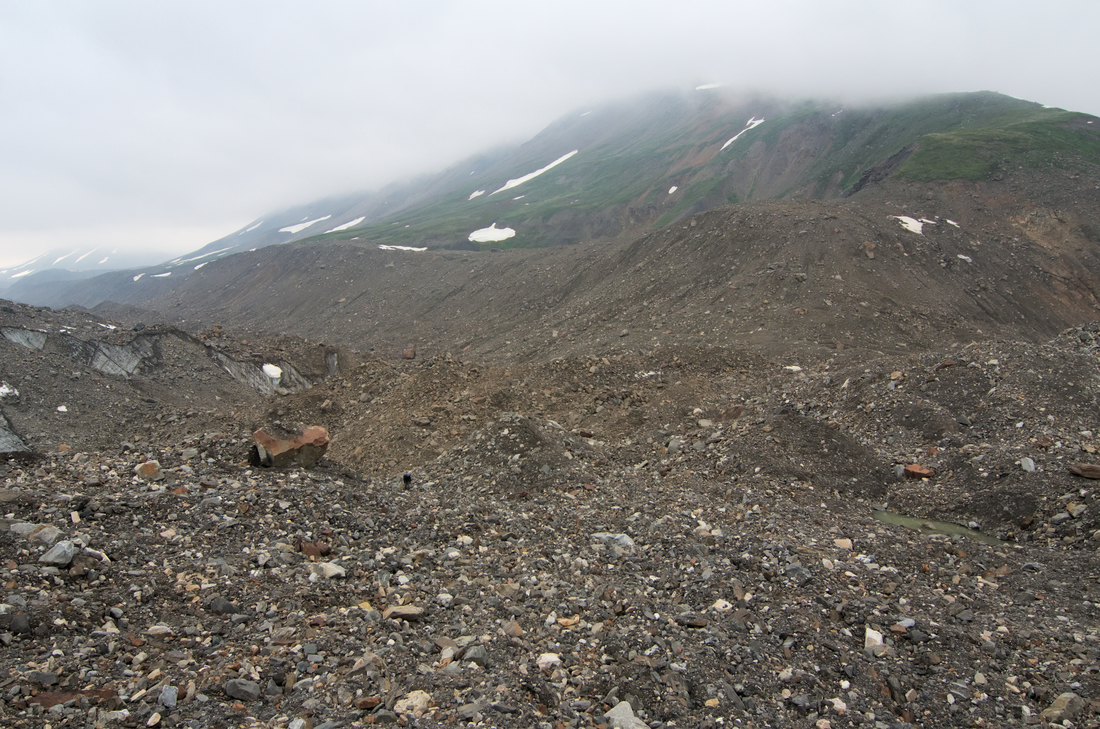 It’s hard to convey the vastness of everything here. Sometimes, what looks to be right in front of you turns out to be an hour of walking. This is still on the glacier, just a debris covered moraine near the northern margin. That bit of ice center left is the southern boundary of the now empty lake we were hiking into. For scale, Andy is the black dot under the big boulder in the center. 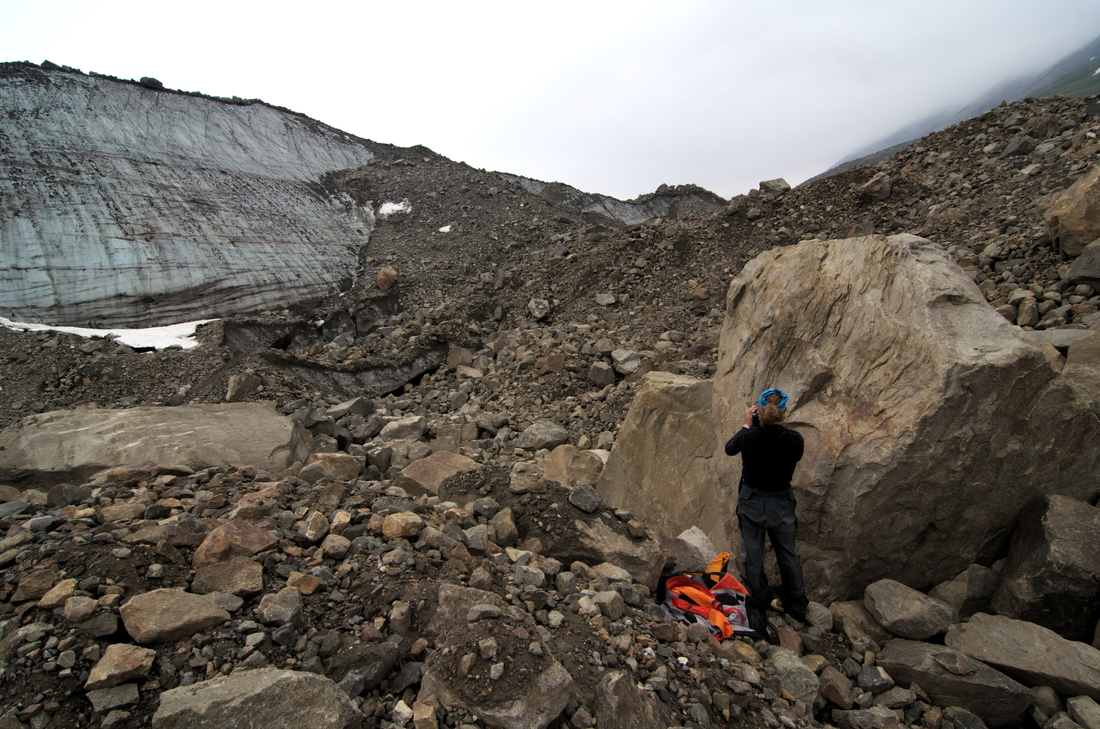 The big boulder next to Andy is the one we have the pressure sensor tethered too. It monitors the water pressure as the lake fills and drains. Last year this lake filled and drained many times, sometimes over the course of the day, so it may be a good indicator of sub-glacial water pressure. It was still there and intact. I hope I can get back to it in the fall

The next day, after installing some new poles on the Loket tributary, we hiked down to the landslide debris to the east. It was cool to watch the water channels get deeper as we hiked east. All of the streams were coalescing into a couple of main streams. The water must go down somewhere; we were hoping to find some big moulins near the debris. 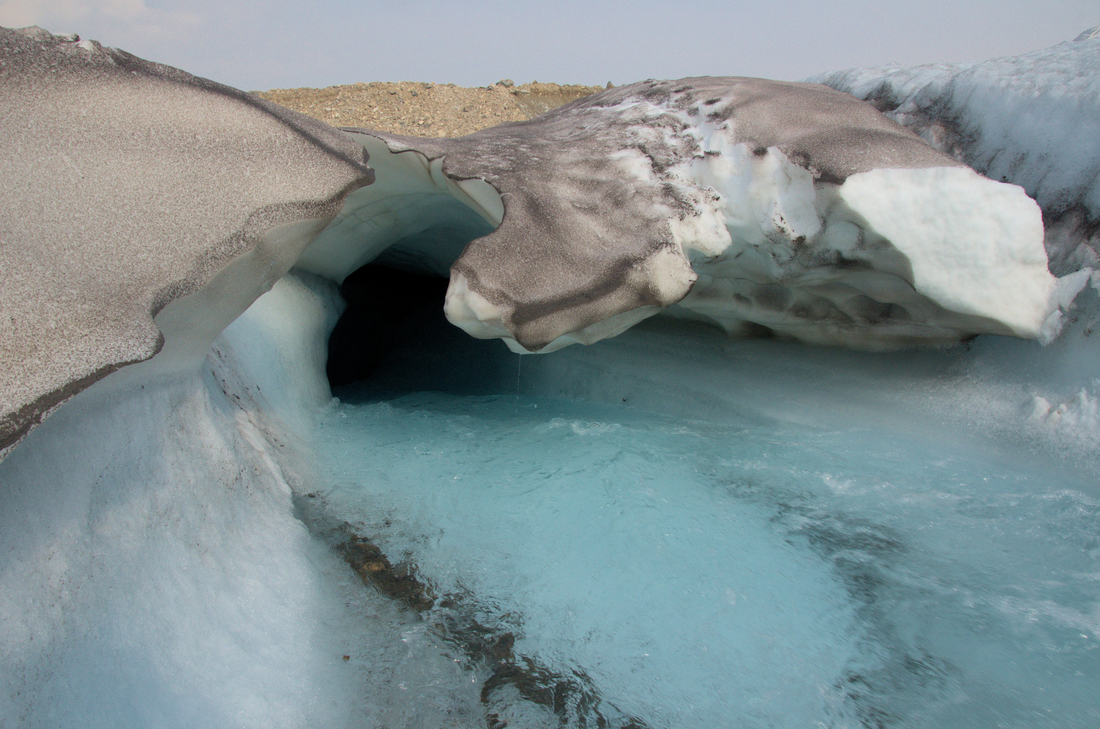 The big moulin for this channel was still covered with snow, but we could just barely see it. Bummer.

Much of the surface water builds up at the edge of one of the 2002 Denali Fault earthquake landslide debris before finding a hole to drain in. The rock isn’t that thick, but it insulates the ice beneath. The height difference above the surface of the glacier is mainly due to the difference of 11 years of melt. We could hear a lot of water flowing deep in this crack, but we didn’t find a big, open moulin we were hoping to. There were quite a few hard-to-forget sunsets. Breaks from the rain and cold were very welcome. 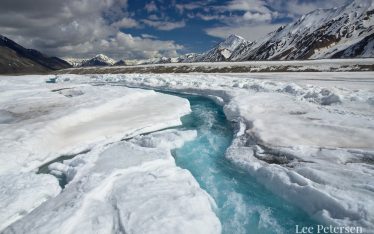