The photo above displays some of the enormous ice crystals and hoarfrost observed on the ceiling of a glacier cave in the Castner Glacier in March of 2020. This cave is an example of a Röthlisberger channel or R-channel. These are channels formed at the base of the glacier by flowing subglacial water, melting a semi-circular tube through the ice. The water flowing through the channel, deep in the glacier, heats the ice from friction. Without this frictional, viscous heating, the channel would close from ice deformation due to the incredible overburden pressure of the ice above.

Near the exit of the channel, warm air in the summer melts the ice further, sometimes leading to large cave entrances like this. It’s highly unlikely that water would ever completely fill this part of the cave. However, further back, sometimes only a few tens of meters, the channel will be full to the ceiling in summer months.

How does all the water get under the glacier to form these channels in the first place? Well, there are quite a few ways. During the melt season, water can drain through the ice surface through crevasses and near-vertical holes called moulins. Much of the water eventually ends up at the glacier bed, where there are a series of linked cavities, channels, and even subglacial lakes. Additionally, water can be present from geothermal activity melting the ice above as well as frictional heating from the motion of the ice along the glacier bed.

Caution always needs to be exercised if approaching or entering any glacier or ice cave. There is quite a bit of overhead danger, as there are often many loose rocks at the top that fall frequently and unexpectedly. In winter, avalanche danger may pose a risk. These caves are usually at the terminus where the ice is often quickly melting and can potentially collapse without warning.

There can also be great danger from glacial lake outburst floods. Water often pools on glacier surfaces and at glacier margins forming lakes. Once the water pressure is high enough, and the subglacial drainage system is ready, these lakes can drain. Sometimes they drain catastrophically in a matter of hours

The video below shows some active moulins, supraglacial streams, and pooling water on the surface of glaciers.

The hoarfrost and giant ice crystals on the ceiling grow from water vapor present in the cave. Their formation requires a unique environment like that present in glacier caves like this. There is a large temperature gradient between the floor of the cave and the ice that drives convection that allows for the deposition of ice from supercooled water vapor on the cold surface of the glacier ice.

Sometimes these crystals grow as hexagonal prisms, with most of the growth occurring at the edges and corners of the crystal. These often develop a hollow cup-shape. This is described as skeletal growth. The photo below shows an area full of skeletal growth patterns with a significant amount of branching.

In another area of the cave, there was a section of chandelier-like long c-axis ice columns that had limited skeletal growth on them. It’s not fully understood what mechanism drives the growth of these spikes, but it is thought that they form much faster than the surrounding skeletal crystals.

Some of the most beautiful ice crystals were in the glacier ice itself. It’s interesting to note that glacier ice is actually considered a metamorphic, mono-mineralic rock, composed of hundreds of millions of ice crystals. The crystals are metamorphosed snow crystals changing under the weight of the snow on top of them. The pressure causes the recrystallization of many snowflakes into larger and denser ice crystals.

The ice we see down here at the glacier terminus formed high up in the accumulation zone. That’s where at least some of the snow remains at the end of the summer before new snow falls on it. On the Castner Glacier, that’s about 15 km (9 miles) from the terminus. The older snow eventually densifies into firn and then into glacier ice. The ice flows down the valley from the force of gravity at a few tens of meters per year, reaching this spot where we get to see it, hundreds of years later.

The below video shows the reflection of the different faces of ice crystals as well as embedded sediment and air bubbles in the glacier ice.

Is glacier ice a type of rock?, USGS faqs 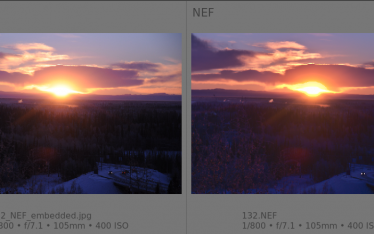 Shoot in RAW
When and why you should (or shouldn't) shoot in raw. Photography and aurora photography tutorials.
3 Likes Honesty in Aurora Photography
I've heard a few stories recently about disappointed "aurora tourists" around the world. Do the photos really look like what you see in social media? My article on honesty in...
2 Likes What Causes the Aurora
A basic, yet comprehensive explanation of what causes the aurora. Tying together the solar wind, geomagnetic field, Van Allen belts, atomic energy states, and the electromagnetic spectrum.
7 Likes